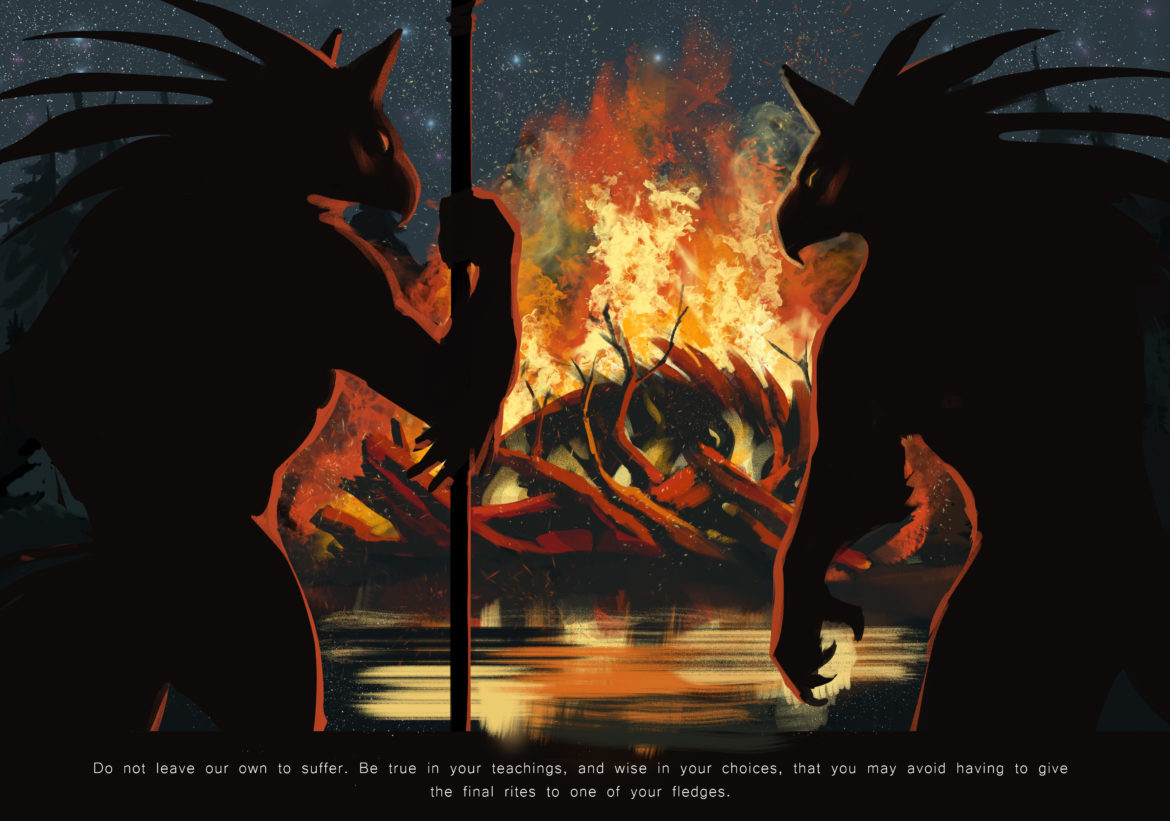 The walnut feathered Arvian stalked low through the brambles, using his spear and sheer bulk to clear the path ahead. Behind him, one of the older fledges followed closely, dark of colour with vivid red hackles. The younger’s icy blue eyes observed everything, and admired nothing, as he had been taught while hunting.

Today though, they hunted in the sunlight. So accustomed to hunting at night under the moon, it felt almost unnatural to stalk prey at such an hour, but it had been necessary. A precaution.

One didn’t hunt the moon touched in her pale white light. The younger Arvian with him had been told only what he needed to know.

While they were large and hulkling avian looking beasts, imposing in their own right, so too was the old hunter’s prey. They had ranged far from their tribe’s settlement, through the thick woods and into the wilderness beyond, nearing their tribes territory boundaries.

His apprentice had done well to keep pace, though perhaps he had been a fledge too long. Opportunities to prove oneself worthy were few and far, so when the shaman of their tribe approached Kleng with the dark secret he had to share, he knew it would be the perfect chance for his apprentice to prove his worth.

This would be his initiation rite. He had learned all that he could as a fledgling Arvian to the tribe after his transformation, and was more than ready to begin teaching his own charges the ways of their kind. He was well adapted, strong, and had a mind as sharp as his talons.

This was one final lesson.

Kleng halted for a moment, sharp, golden eyes scrutinising the forest floor. Tracks had been trampled into the autumn leaves, great gouges of earth and moss torn by the creatures path.

The elder hunter had tried twice now to herd their quarry into a more favorable position over the last few weeks, using fire and scarcity of prey to force it’s movements. Now, it seemed, those efforts were being rewarded.

“Isiat, here. Tell me what you see.” He motioned to his apprentice, gesturing the other over to the tracks.

He was almost fully as tall as Kleng, and just as sharp of sense. His mind was for wonder, but also of sense and logic. He would make a fine addition, assuming they survived.

“It is large… talons and…” He paused, leaning to inspect the tracks more closely, realisation crossed the apprentice’s face, as well as trepidation.

“He is one of ours, yes. Your eyes do not deceive. Trust them to show you truth when you see it. I have hunted him for three moons now. Today, we finish it.” Kleng spoke with a grim air of finality, crossing his broad arms, the butt of his spear resting in the peat.

“His own transformation was not as successful as yours. If he had a name, it is lost to the tribe now, but I once taught him as I teach you. Haskir… he was an honor guard to the Chieftain, proud, strong. But the moon did not smile upon him, as she did you.” Slowly, Kleng began moving forward, speaking softly as he beckoned the fledge along after him.

“This is the result of what happens if they do not die. Physically, he has the gifts of strength and size that you and I share, but his mind is tormented, reverted to that of a feral beast of instinct, craving food and shelter and flesh. Reason does not work. Anything that was left of who he was died that night his ritual was disrupted. You shall not speak of this outside of myself. If any ask, we stalked an iron boar, and slew it by the cliffs, where we lured it over the edge. None will question you brought it down.”

The younger nodded without word, and followed the master hunter further into the woods.

The cave was ringed by a clearing, far from their tribe’s home, enough that none would stumble upon it by chance.

The Arvian was stalking on knuckles and feet, tearing at a fawn when they found it. Old mud and sticks and blood stained what had once been a proud coat of ebony and hazel. His vicious beak was tinted red where evidence of its prey’s demise had gone unwashed.

Together, the pair stalked it, and gained its attention with stray arrow shots from their hunting bows that barely pierced its hide. The broadheads, even with the tremendous strength of the warriors behind it, did nothing more than make the massive, moon-cursed creature flinch and growl in fury as some new meat came to interrupt his meal.

It gave a defiant screech into the afternoon light, bellowing challenge to those who dared approach it. With another cry, it barreled towards Kleng with great, lopping strides, closing the distance with alarming speed for such a massive foe.

The beast was cunning, and Kleng circled with it before it struck. It had little regard for its own safety, recklessly pressing where a trained warrior would have withdrawn. He couldn’t afford to see the twisted Arvian snapping mindlessly at him as his old apprentice.

It lunged at him and threw its full, significant strength behind the attack, raining blows and talon slashes at him. The elder hunter masterfully parried each in turn, dancing backward on nimble feet, slowly attempting to wear the cursed beast down.

The walnut coloured warrior rolled beneath its next attack, fending off its snapping beak as the cursed one sought to overpower him. In lunged again and knocked his spear aside, before bodily tackling him to the earth, attempting to peck his eyes out behind his bloodied talons as he fended the blows off.

His apprentice however, took the presented opening and drove his spear between the monster’s ribs, twisting the silvered blade sharply, and with a whimper of pain, it slumped in Kleng’s embrace, calming as if it understood it’s death was assured now. No longer the moon cursed beast, but merely the fallen apprentice, he spoke softly as the life left its dying eyes.

“Go now brother. Your mortal duties are ended. You fought well. Go, Haskir, warrior and guardian, and sing to the moon spirit of your end, that she may list it among the stars…” One last wheezing breath left the ebony hackled Arvian, and at last, he was still.

Almost reverently, Kleng let his former apprentice’s head come to rest upon the grass. There was sandness in the old hunter’s eyes, but also gratitude. Relief perhaps, that this small wrong in the world had now been righted. He stood, and looked to his new apprentice, now a full Arvian warrior in his own right.

There would be a ceremony and celebration when they returned, but that was for later. For now, they had one last duty to perform.

“Fetch wood for a pyre. We’ll stand vigil till nightfall, and then burn his remains when the moon rises… Remember this lesson, Isiat. We do not leave our own to suffer. Be true in your teachings, and wise in your choices, that you may avoid having to give the final rites to one of your fledges.”